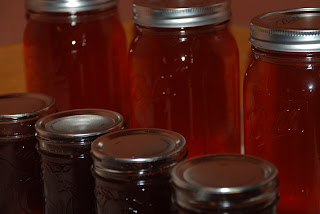 Putting up produce has become a hobby of mine the past few years. In an effort to live a simpler, more sustainable lifestyle here in suburbia Mr. B and I have been processing boxes of figs, tomatoes, apricots, etc this summer. I remember driving around last fall, running errands and seeing several beautiful fruit trees, overripe with their summer bounty dropping fruit onto the grass, the sidewalk and streets. It occurred to me that many people probably had fruit trees and small gardens that over produced a bumper crop of food that their families couldn't possibly eat on their own. In a flash of genius I returned home and posted an ad on our local Craigslist asking if I could come and glean extra fruit and produce from peoples' yards. Food that would otherwise go to waste.

Surprisingly, I had such a good response to this ad, that I decided to repeat the experiment this year. This weekend I received an email letting me know that a woman had huge apple trees getting ready to drop fruit. Would I please come and pick them? Well of course I will!

I put the Little down for a nap and left him in Mr. B's care while I drove over to her house to pick her apples. Except they weren't like any apples I had ever seen before. Eh, no. They were CRABAPPLES. Extremely sour, teeny-tiny fruits were these. I was convinced however that there would be something I could do with them. So I scoured the internet looking for crabapple recipes that I could can. And lo and behold I found recipes for crabapple jelly! Glorious! I thought. Crabapple jelly! Divine!

It doesn't appear to matter what I do when processing the crabapple jelly. It always comes out ROCK HARD. Over cooked? Too much natural pectin? I have no idea. The husband has suggested we keep the processed jars of rock candy and attempt to soften them this fall in the microwave to pour over ice cream or to use as jam in butter cookies. Hmm...I'm not sure if it will work. But we'll give it a try. After my second failed attempt at crabapple jelly, I took the rest of the juice, strained the murky pulp out and processed it in quart jars as juice with a little cardamom, cinnamon, and nutmeg. I'll use it in smoothies later. The spiced juice turned out perfectly - which soothed my inner Julia Child slightly.
Posted by Simple Mama at 9:24 AM