I haven't been blogging as much lately.  In part because I was busy with Etsy orders during the Easter season, and in part because I've just needed a bit of a break from the interwebz.  Some time to disconnect and be more present in my every day life, with my family, with my son, with myself and creativity.

While I've been absent, we've been planning my son's 5th birthday party.  Originally he wanted an Angry Birds party at our local indoor bouncy house play land.  I was ok with that, but was finding it hard to dredge up inspiration.   I searched Pinterest and found lots of fantastic Angry Birds birthday party ideas, but I just wasn't excited about it.  I was happy to try though, because after all, this is his birthday - and you only turn 5 once.

Recently, during a trip to OMSI (The Oregon Museum of Science and Industry) we found that one of the displays had changed to a LEGO exhibit.  Amazing.  I gave The Boy my camera and let him snap pictures to his hearts content (it was allowed). 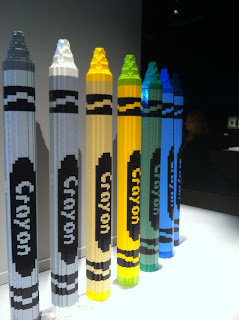 Then later while we were building with his Legos, he asked me about the possibility of a Lego birthday party at our house.   Finally, something I could get behind.   I was inspired.  And I'm only a teensy bit ashamed to admit that I pushed for him to commit to the Lego party over the Angry Birds party.   Thankfully it didn't take much convincing.

So here we are - a few weeks out and we've been plotting and crafting and dreaming and building and creating general mayhem in our house.  All in the name of Lego fun.

Please excuse the next few photos.  My lap top crashed, requiring a new purchase and I haven't downloaded my editing software yet.   I'll make sure to get better photos during the actual party.

We've been making Lego rings as party favors (necklaces too - but I didn't feel like running upstairs and bringing them down for a photo shoot.) ;) 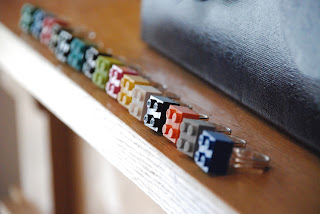 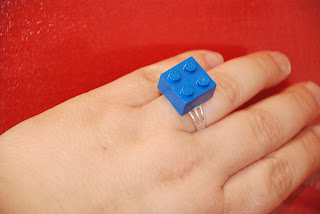 The rings were really easy to put together.  2x2 Legos epoxied onto a silver adjustable ring.   We used this epoxy.

We printed out Lego heads on yellow cardstock from free clip art found on line.  I hand cut each one while watching a movie with my family one night and used an exacto knife to cut a slit above the eyes and below the smile and slipped them over drinking straws. 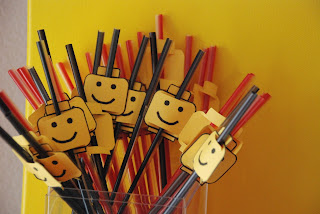 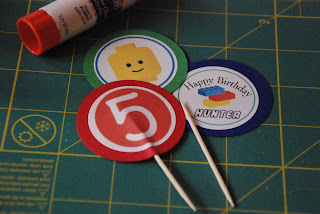 These are images we've printed out on Avery round stickers, stuck to slightly larger card stock circles that I cut out with my Cricut and then glued to a toothpick.

And giant 3-D Lego art.  I used canvases that I've had sitting in my portfolio for years.   I spray painted each canvas in primary colors and used leftover cardboard ribbon spools as the pegs. I glued a round piece of construction paper the size of each spool to the top in order to cover the hole, hot glued them to the canvas and then spray painted again.   I still need to finish the yellow canvas - but I love the way they turned out. 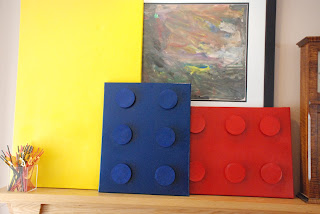 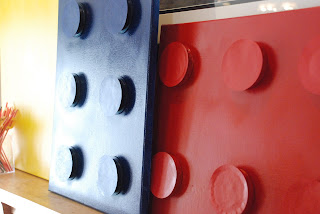 More party planning to come.  I think I'm having as much fun planning this as my son is.