We had this problem when we lived down in the south once. Come spring time, a very aggressive robin began attacking his reflection in our sliding glass door. Every single morning. Beginning at 5:00am.

The only way to stop that poor, misguided bird was to cover our back sliding glass door on the outside with newspaper to keep the little thing from seeing himself every day.


So a few weeks ago, when we woke up to the "Thwack! Thwack! THWACK!" sound again I became disoriented. When had I moved back down to the deep south? Where was I? I opened a bleary eye and looked at the alarm clock.

Stumbling downstairs it was apparent we had a new visitor at this house too. Robins, it would appear, are aggressive everywhere.


My son is fascinated by this bird. So much so that he tried opening our sliding door and screen to let the bird come in and live with us. Eh....no thank you. Every morning, for 3 hours, this relentless robin attacks his image on one of the 6 different windows downstairs.

I contemplated putting up newspaper again to block his reflection - but our home would be entirely dark. Back in Atlanta the robin that would wake us up every morning only liked ONE window. Here? All of them.

So I'm at a loss. This poor birdie keeps attacking his image. Here he is coming in for the attack: 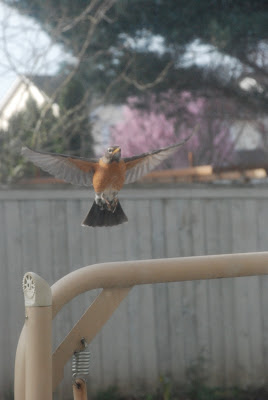 So every morning I wake up at 5 am. And no. This bird didn't get the memo about the time change. So it feels more like 4am.