On Caving In Regarding Commericialism 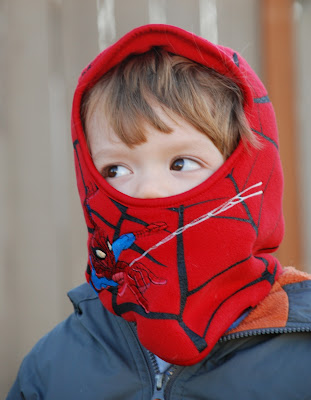 Bless me Internet for I have sinned. It has been 5 days since my last blog post. And 3 days since I officially bought into commercialism and marketing to children.


With temperatures hovering in the teens this past week, I've been fighting a losing battle to keep The Little's head warm while he's outside. My child refuses to wear a hat. It's not a new phenomenon, he's yanked hats off his head since he was an infant. In his sleep, on purpose, unconsciously. It doesn't matter if the hat is colorful, cute, ties, has flaps, is cotton or wool. He won't keep them on.

But in this rare and prolonged cold snap in the Pacific Northwest it is simply not an option to go outside without the proper clothing. When you walk outside and the boogies in your nose freeze, you KNOW it is cold.

So I took my child to the local Target - a store we usually manage to avoid simply out of necessity, because it seems we can't walk in without spending oodles of money on unnecessary items. I was in search of a hat that my child Would. Not. Pull. Off. And while were were perusing all the cute little knit caps my TWO year old son grabbed my hand and pulled me over to the end cap exclaiming, "Mama! MAMA! SPI-ER MAN!"

What?! Who taught my son about Spider-Man? I know it wasn't me. On the rare occasions that we allow him to watch television it's PBS - World World, It's a Big World, Dinosaur Train. We do not have cable. We've never watched Spider-Man in front of him. And yet? He knows Spider-Man on sight? How did this happen? Where was he exposed to Spider-Man? How on earth does a TWO (2!) year old know about him?

But still...the wheels in my head turned. What was the more important battle here? Commercialism or staying warm? If I allowed him to pick out his own hat and mittens was there a possibility that he might keep them on for longer than 4 seconds? Was it worth a shot? Would I be opening up a can of worms I didn't want to deal with later? I wasn't sure. But the need to keep warm won out over my own reservations about superheros and mass marketing to children. The industry won.

And so I allowed my son to bring home his garish red Spider-Man hat and gloves. And he has dutifully put them on every single time we've gone outside. No arguments.

And I can't decide if I should pat myself on the back for brilliant parenting or if I should go put myself in the corner for caving in on my values. 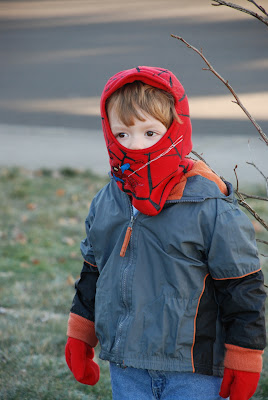