The Great Pumpkin paid us a visit Halloween night. In the end, I'm not sure The Little fully understands the concept of Halloween or The Great Pumpkin. He did manage to finally grasp that you're supposed to say, "Trick-or-Treat" when you walk up to a new door - only his version comes out more like, "Tit-or Teet." *Sigh* What are you gonna do?

After The Little and Super Hubby came home from trick-or-treating my sweet toddler helped pass out candy to the last few stragglers that came ringing our door bell. When I accidentally reached down into HIS candy bowl, rather than the community candy bowl to give a piece of chocolate to the cutest little Corpse Bride you've ever seen The Little screamed like I was pulling his eyelashes out.

I quickly grabbed the candy from the other container.

When the evening was over he was distraught at the thought of leaving all that glorious candy downstairs while he went upstairs to sleep. We tried explaining to him that the candy would be fine, and that in the morning The Great Pumpkin would have paid a visit during the night - taking the candy with him and leaving a wonderful surprise in it's place.

Of course all he heard was that the Great Pumpkin was going to Take. His. Candy!

Super Hubby managed to gather up The Little, shrieking, exhausted, flailing limbs and all and get him upstairs where he promptly fell asleep.

And true to our word, The Great Pumpkin came sometime in the middle of the early morning hours leaving a surprise in place of all the candy. 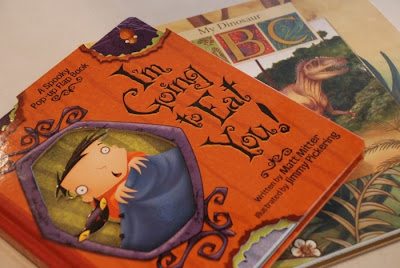 I would have preferred to craft something myself for The Little, but being ill this week really threw a wrench in all my best laid plans. It doesn't seem to matter too much though..The Little loves his new books about dinosaurs and not-so-scary monsters. And all that candy he was so fearful of leaving alone downstairs? He hasn't asked for it once.

I hope you all had a wonderful Halloween!