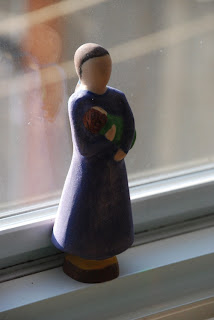 The Little has, since he first learned to talk, referred to mama milk as "Bubs." Where he picked this up, I'm not certain, but it's now common vernacular in our home.

At 2 1/2 he still loves him some bubs. Most nights I wake up at least once to insistent nudging, and a sleepy, sweet voice saying, "Mama. Move. Bubs fease." I'll role over groggily and he quietly latch on and nurse himself back to sleep, his head resting on my shoulder.

I cherish these moments. I know they will be over far too soon. Already he's showing signs that he's heading down the road to self weaning. Daytime nursings are few and far between, if they happen at all. Often times, he doesn't even remember to ask to nurse before nap time.

I remember when we first began our breastfeeding relationship. Me, a brand new mother, with few resources to draw on and even fewer friends at the time who were or had breastfed their own babies. I made a promise to myself and my new son that we would try, just try nursing for 1 week. When that week came and went, the promise was extended to 6 weeks. Then 6 months. Then 1 year. You get the picture, right? The more research I did about the benefits of extended breastfeeding, both physically and emotionally, the more determined I became to let this little one self wean himself.

And, like any mother in today's society who chooses to breastfeed her children, I have had my fair share of looks ranging from startled to barely suppressed condemnation while nursing my son in public. I've heard the quiet censure in voices when it is discovered that my now two year old is still nursing. I've listened to strangers and family alike tell me that my son will grow to have fetish, an unnatural attraction to female breasts and an unhealthy relationship with me as he grows older. But, I've also had champions. People whom I chose to surround myself with as our nursing relationship progressed. Strong women and supportive men who understood this bonding relationship and the benefits it offered to both mama and babe. To these women and men I offer up my deepest thanks. My son will continue to enjoy his "bubs" as long as he needs too in part because of your encouragement and words of wisdom. And, when the time comes that he no longer wants or needs to nurse from his mamas bosom, I will find other ways to comfort him, to fill our moments with quiet tenderness and new memories.

I had a small beautiful wooden sculpture custom created to commemorate our nursing relationship together by Zooloonatural on Etsy.com When it arrived, my son carefully took it out of the package with sparkling eyes and said to me as he held it close to his chest in a tender hug, "Mama! Bebe! Bubs!" Indeed. I couldn't have said it better myself. 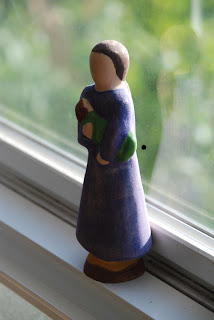