I asked The Boy what he thought might happen if we microwaved Ivory Soap.   He considered this carefully for a moment and then said quite thoughtfully that he believed it would melt like an ice cube.   Pretty astute for a 4 year old. 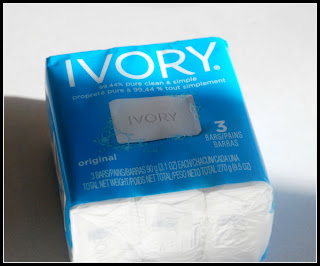 We decided to find out for ourselves as we removed a bar of soap from the package.   I used a kitchen knife to cut a small piece of the soap off and placed it on a microwavable safe plate. Then we watched magic happen.  Or science.  Take your pick. 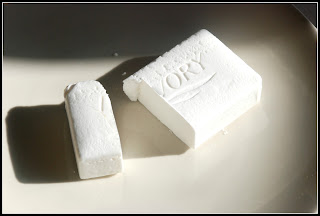 We set the microwave on high for 60 seconds.  The soap, rather than melt, began to expand to enormous proportions, overflowing off the sides of plate!   I carefully removed the plate and allowed the soap to cool for a few minutes before giving it to my son.   It wasn't too hot, but do exercise caution when handing nuked soap to small children.  We don't want them to accidentally receive a burn. 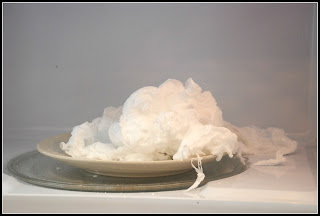 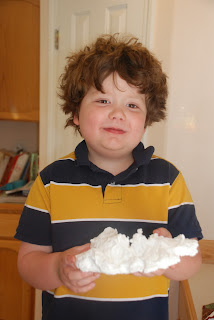 How it works:  When you heat the Ivory soap, you soften it.  You're also heating air and water trapped inside the soap, which in turn causes the water to evaporate and the air expand. The increasing gases (air) push upon the now soft soap, causing it to expand and become a foam. The appearance of the soap is changed, but no chemical reaction takes place.  Other types of soap don't incorporate as much air whipped into them and don't have the same reaction in the microwave as Ivory does.  The Ivory soap now feels soft and almost powdery, but it still works as well as the bar form. You can actually crumble it in your hands as it continues to cool - it looks a lot like snow once crumbled.

You don't have to worry about this little experiment damaging your soap or your microwave.  Any foam that overflows the edges of your microwave safe container can simply be cleaned up with water.   Science and cleaning at the same time.  Pretty cool. 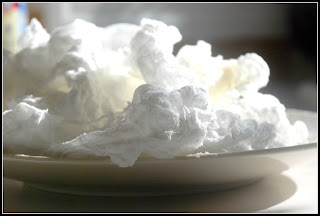 Learning as we go, 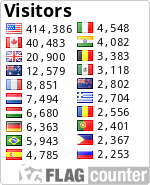