By now you're probably all familiar with my new found affinity for Meyer Lemons. I only discovered them this winter, and I've been shaking my head every time I use one, wondering why I didn't know about them before.

Meyer Lemons are thought to be a cross between a true lemon and an orange. They are rounder than a true lemon, and the thin skin is so fragrant you could swear you were standing in a grove of citrus trees. They taste like a little bit of lemon heaven, juicy and bright without the tart bite that regular lemons impart. I've been known to peel and eat them whole this winter.

I had about 6 Meyers sitting in my fruit bowl, begging for use. I'd already canned Meyer Lemon/Vanilla Bean Marmalade, and have a quart size container of Meyers preserving in salt in my fridge. I also have another quart of apicy pickled lemons curing on my window sill, but I digress.

I stumbled upon this recipe yesterday at Food In Jars. I knew immediately I would try it. I've always wondered about lemon curd. 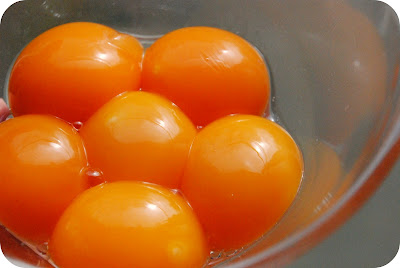 Loving those bright yellow yolks from our chickens.

You can usually find lemon curd in the jam or jelly section of your grocery store. Having never tried it, not sure how to use it, and balking at the price I'd generally ignored the lemon curd section and instead reached for my trusty strawberry jam. (Eh...until I learned how to make and put up my own jam. Store bought jam hasn't touched these lips in over 5 years. 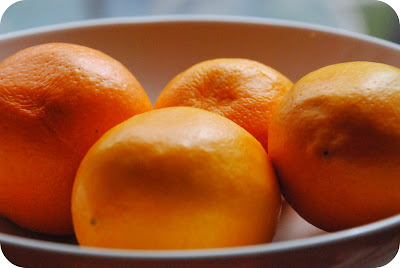 Lucky you, who have Meyer Lemons growing in your area. Take advantage of them!
I'm going to pause for a moment and talk about a point a friend brought up yesterday. I posted on Facebook that it was citrus season I was going to make lemon curd today, and her response was that it was indeed citrus season in the southern regions. Meyer Lemons have no business in the north. Ah....the complexities of eating sustainably and locally. In truth, we do try to eat locally as often as possible. We grow our food. We raise our own chickens for eggs (which make an appearance in the Meyer Lemon Curd recipe.) We have a full share at a local CSA, which provides us with locally grown, organic produce throughout late spring and into the middle of fall. We frequent our farmers market. We do try to be locavores. Really. That said, I'll confess right now that we have a Costco membership. And it was at Costco that we found these Meyer Lemons. Twice. And I purchased them both times. Sometimes friends, things are so good, so delicious, so infrequent and fleeting that they are worth the purchase. 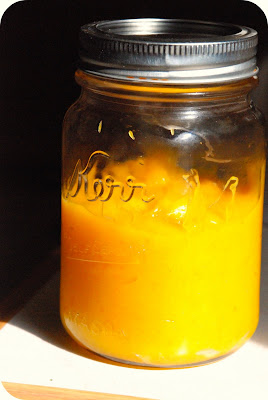 And so it is with Meyer Lemons. Holy cow is lemon curd good. In truth, I think more lemon curd made it into my mouth than in the jar - because the recipe said it would fill a pint. A pint! I don't believe that I actually ate THAT much off the spoon, so the recipe may make a bit less than stated. On the other hand, it is entirely possible that I just consumed my daily allotted caloric intake in Lemon Curd. If so, I am unapologetic. It was delicious. It's in our fridge waiting to be finished. You can water bath process it, but the shelf life is only something like two months. I don't think it will be around that long. I'll add a bit to The Boy's plain yogurt in the morning. And I'll probably make some meringue cookies tomorrow with the leftover egg whites. Dipped in the curd they will be like a mini lemon meringue pie.

Have a wonderful weekend,