Our cruise was over before we knew it. 7 days of sun, water, beach, new experiences, new cultures, new people. Before we were to head home however, we had one last full day in Puerto Rico.

Super Hubby and I decided that the best way to spend the day was to rent a car and car seat and drive to the far eastern side of Puerto Rico to see Luquillo beach and the El Yunque National Rain Forest.

The waves at Luquillo were far too high for us to play in. It wasn't until later that we discovered that there is a coral protected beach that the locals come to play in. When people talk about Luquillo, that is the spot they speak of. Still, we snapped a few photos. The sand was so different from the other beaches we had been to. Almost a bright orange. It was gorgeous little spot though, with a handful of surfers and picnickers playing during lunch. 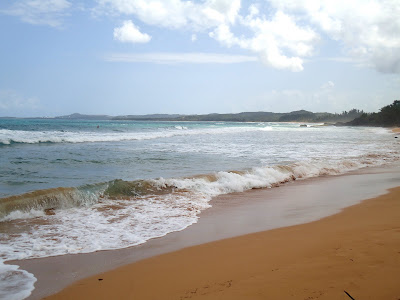 From Luquillo we headed east and then south, planning on entering El Yunque from the southern end and working our way back up north. As we made way down the eastern side of the Luquillo mountains the road became more narrow and unimproved. We found ourselves in the back country - little houses dotted the mountainous terrain, perched among some of the most gorgeous scenery I have ever witnessed. As we kept driving up, up, up, I mentioned on more than one occasion that this seemed crazy! Surely we were on the wrong road? Wouldn't a main road to a national rain forest be in better repair? I should add, it was raining off and on all morning - so the road seemed even more treacherous and muddy. 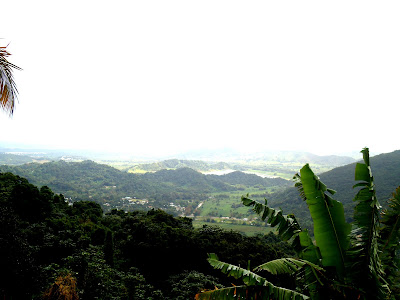 We finally pulled over in a small residential area and stopped to talk to two gentlemen. One was a native Puerto Rican, the other an ex-pat from Florida. (Are you considered an ex-pat if you move from the States to Puerto Rico?) The assured us that we were indeed on the correct path, but that the south entrance to El Yunque had been closed for years due to a washout. You could still go up to the entrance, park your car and walk around, but you couldn't drive through. After finding that the entrance was only another 6 miles or so, we decided to head up. How beautiful it was! Wild and untamed. Overgrown and magical! We found a short trail that led down to the roaring river and explored for a bit. 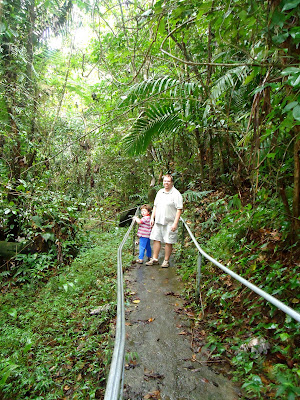 After finishing up on the south side of the forest, we hopped back in the car and made the journey back up to the north side of El Yunque to the main entrance. The roads this direction are well maintained. There are periodic services such as parking lots, bathrooms, marked hiking trails and even places to get food. 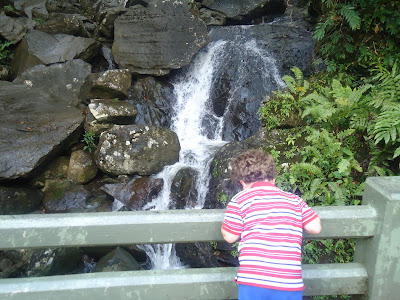 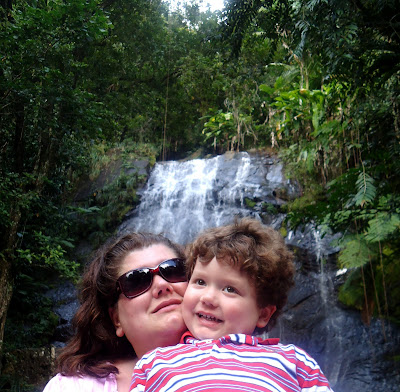 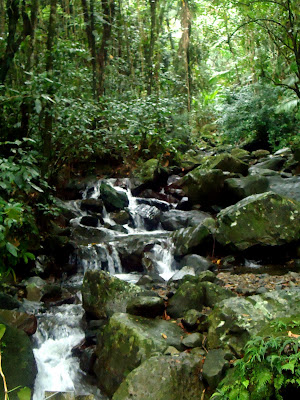 We spent several hours in El Yunque. I mentioned to Super Hubby on multiple occasions that I felt like I was walking around in scene from Jurassic Park. With nightfall not far off, we realized we were going to need to head back to our hotel soon. There wasn't nearly enough time in one afternoon to feel like you had even scratched the surface of this amazing rain forest.

I was so happy we made the decision to rent a car and get out of San Juan. Once you're out of the city Puerto Rico feels so, well....Puerto Rican. English isn't spoken as widely here, the buildings and houses look and feel different. It loses much of the commercialized, touristy feel and takes on a whole different appeal. One that we liked very much.

Finally, before I wrap my vacation series, I wanted to take a moment to share the following picture: 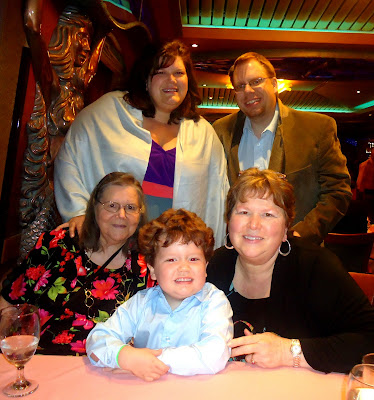 A photo of our family on the formal night aboard the Carnival Victory. My grandmother had recently celebrated her 87th birthday. Having always wanted to go on a cruise, we asked her to join us. Her eldest daughter, my Aunt C. joined us as well. Three generations of the oldest women in the family. Now that I think of it, every single person in that photo is a first born.

It was such a blessing to have my grandmother and aunt on this trip with us. A memory that I will always cherish and be thankful for.

And with that, I'm at the end of our Southern Caribbean vacation. It was over far too quickly. It left me with a renewed travel bug. Longing for sunshine, beach, and warm water. Thank you for following along!